Stan Lee was a world maker.

Dark Horse created a world from this substrate in which Alien and Predator (and by an act of meta-literary magic, WildC.A.T.s, Stormwatch, and the DC line’s) franchises coexist with the dark anti-heroes, whores, and gangsters of Sin City. 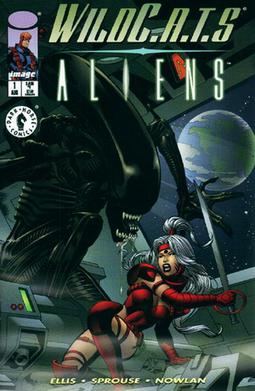 Vertigo similarly blended the worlds of Sandman, Hellblazer (you likely know this franchise by the names of its movie and TV series: Constantine), Swamp Thing, and Preacher (now a TV series as well) to build a universe of these worlds that overlaps and interplays at its borders.

DC, too—Vertigo’s parent company—cribbed the extended universe idea from Stan Lee back in 1940, aping the innovation of Marvel’s Sub-Mariner (pronounced like marinara, not marine: “MARE-in-er”)/Human Torch crossover with their Justice Society stories. Since those days, Marvel and DC enjoyed a near monopoly over the industry, referred to until the early 90s as “The Big Two.”

Which leads us to…

Image Comics, which is both literally and conceptually a product of Stan Lee’s Marvel Universe…

Hold on, it’s important that I recognize a few elephants in the room here.

Stan Lee, for all his creative genius, was also problematic. He was exploitative interpersonally and in business; he also established norms in the industry that were monopolistic and suppressive. The names of those who did much of the legwork to make his genius a reality—often for low pay and little recognition—include Jack Kirby, Steve Ditko, John Romita and hundreds and hundreds of others. Which leads us back to…

Back in 1992, Marvel was pulling in hundreds of millions of dollars riding the comic book boom, as a product of a handful of pencillers whose name recognition drove massive sales. However, as had long been the case, these artists not only didn’t retain any creative rights to what they created (even if they invented whole characters!), but were paid a flat rate for their work. They were making hundreds of millions for Stan the Man and were being paid a pittance for it.

Two of them—Todd McFarland (Spider-Man) and Rob Liefeld (X-Force)—led a revolution behind the scenes, surreptitiously wrangling the leaders of the field who brought in similar numbers*. These created their own universes. Among them would be the worlds of Spawn, The Maxx, and The Walking Dead and dozens of others—but more importantly, created in THIS universe, a world in which independent creators could self-publish and find an audience.

I began my comics publishing career in this revolutionary gesture, as did thousands of other creators. Each of us forged our own extended universes as Stan did. As the MCU blossomed out of Disney’s film studios, WE were the ones who cheered for Stan Lee’s cameos, because he was the Man, and had created the world seeds that we all had planted to build our own echoes of his creation.

That’s the world Stan Lee made.

Come visit Micah at Zionsville Books & Brews. He’s there a few times a week in the evenings.